This is Part 03 of a 3-part series on custom web design, based on the Keynote talk I gave at WooConf 2017. Part 01 explains why we customize websites. Part 02 outlines our process for customization.

The way we look at our roles on projects has a lot to do with the process we are working with. That means that, once we’re shaking up our process, the way we look at teams begins to fall under a microscope, too.

Design Thinking says that more creative and better answers happen when 5 people work on a problem for a day, than one person for five days.  So how does this play out in the real world? What does a team look like that is solving problems together? 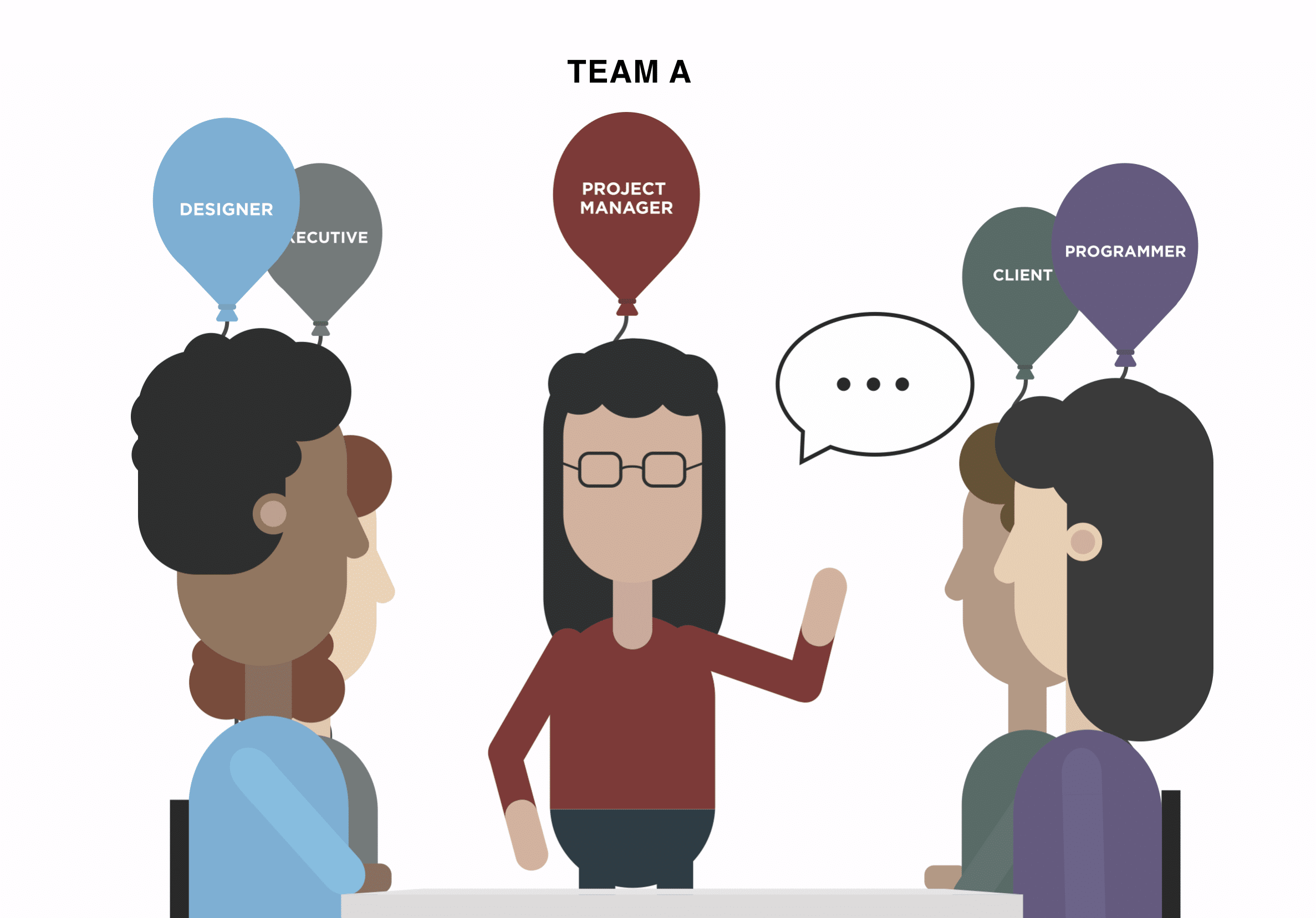 Team A is composed of smart people, each is top notch at their job. During meetings, they speak at length about their particular area of expertise (be it design, development, content, etc.). Everyone is so focused. Meetings have agendas and run like clockwork. They begin and end on time. Everyone gets back to work afterwards. 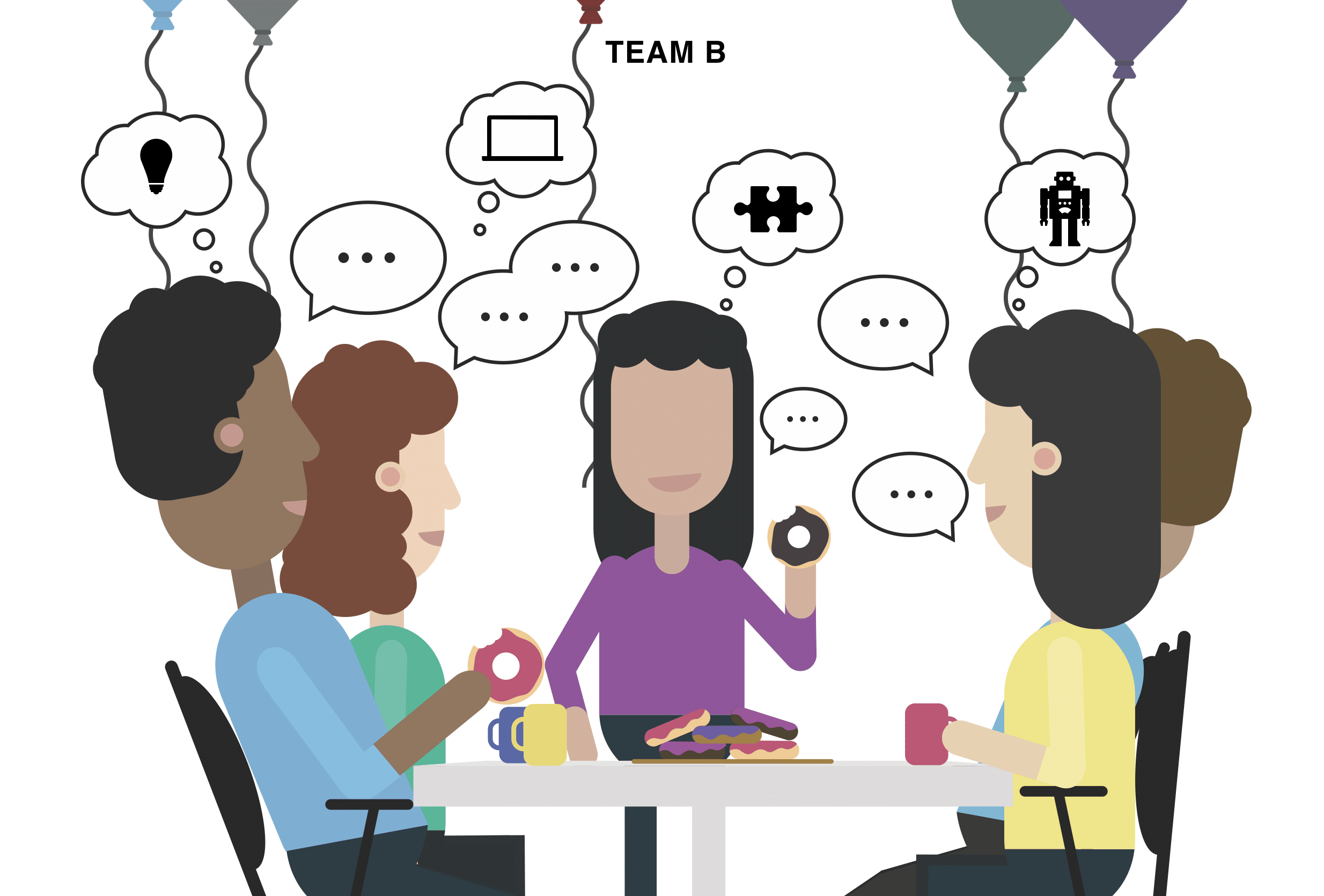 Team B is different. Some of the team has experience, some are green. A few are from the client’s organization and haven’t been on a website project before.  The meetings are lively. Everyone jumps in and out of the discussions, there are donuts, and when the meeting is over, people tend to linger and catch up.

Which is the type of environment do you want for your team? Which is going to be able to produce a successful custom website? Sure, we know which one sounds like more fun. But which team is most likely to do good work?

Guess what? Research says it is team B. Why is that? What’s better about the second team? MIT identified group dynamics that characterize teams with the energy, creativity, and shared commitment to far surpass other teams.  The key to some groups doing better than others is their social connectedness to each other, their ability to listen to each other and share ideas freely.

That’s why the Team A structure doesn’t work so well. When everyone is in their own  intellectual space, there group’s collective intelligence can falter. While Team B might not contain as many individual stars, the sum will be greater than its parts.

As project phases start to melt into each other, you’ll find that you all need to work together at all times. This can an adjustment from what we see in a more traditional approach which defines fairly rigid roles for designer and developer. So strict, in fact, that each has a phase named after them. 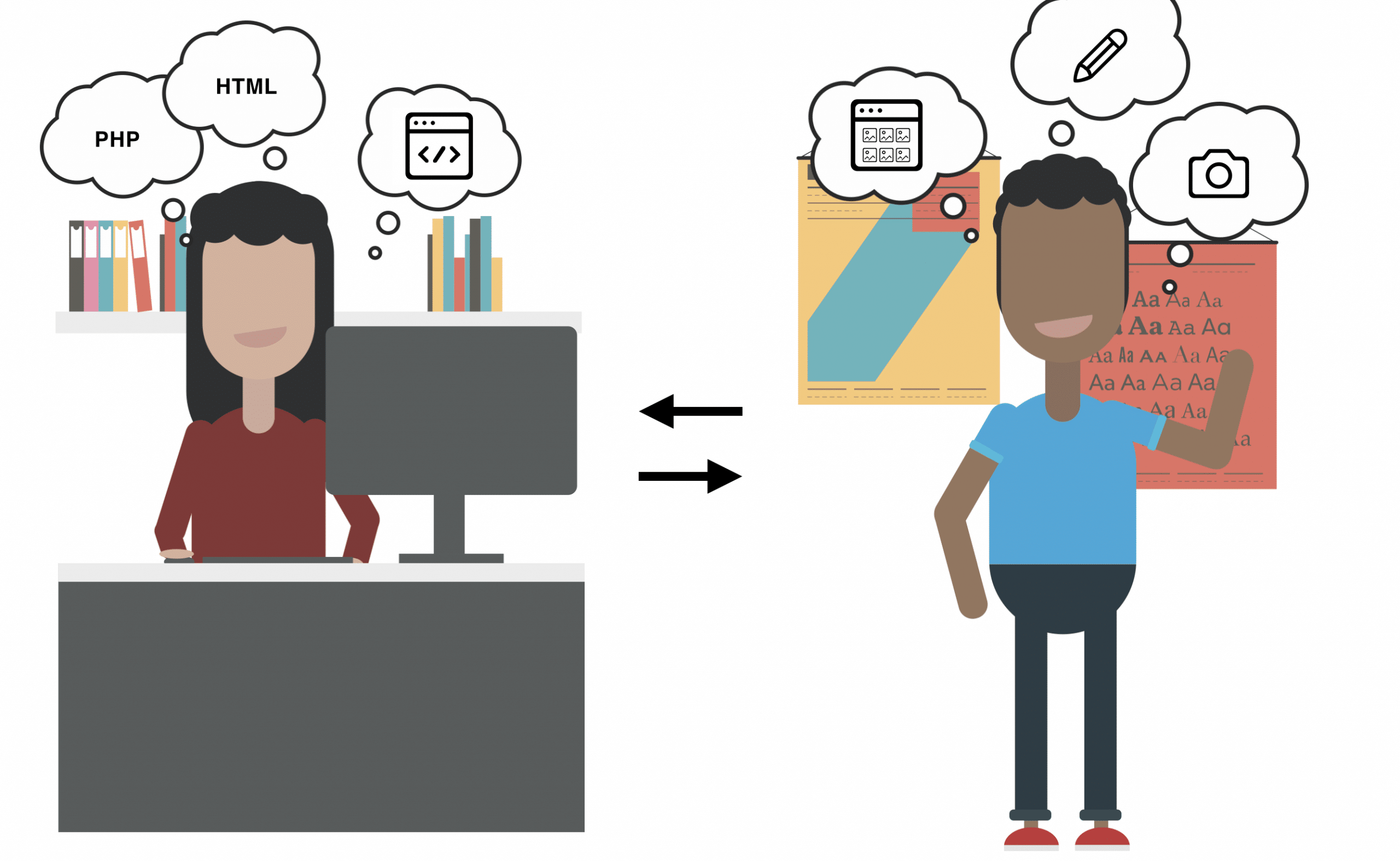 What’s wrong with this? Well, it encourages us to each stay in our own lane, to see things from our own perspective. To defend our part of the work.

For example, have you ever been on a project where you’ve worked hard with your client to nail down the website design and it is finally buttoned down and approved.  You begin to move into development. You have a production kick-off meeting where assets are packaged and handed off from design team to development team. And it is time for the developers to turn the design into a website. Everyone goes into the project with good intentions. 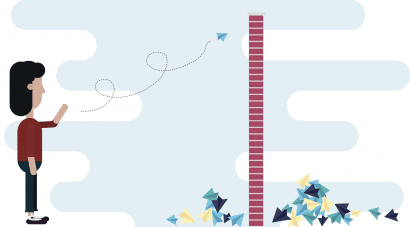 Maybe you’re the developer and you start to look over the design and a sinking realization sets in. “Does this person even know how the web works! How could they have promised the site would look like this?”

Questions are tossed back, trying to define how things are supposed to work. What about mobile! This isn’t a web font! Is there a style guide? 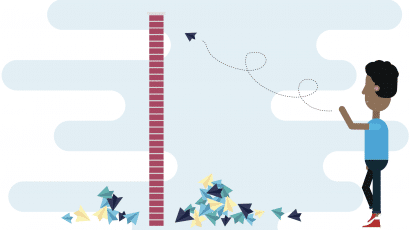 Then as the website is in progress, you show it to designers for the first time. They look at the site in progress and think “Does this person even understand design!” Email start to show up with “design review requested” or “bug tracking.” This doesn’t feel good for anyone.

You know, we were once the developers on a project and I once asked the designer if we could look at a few plug-ins so that his designs were based on what could actually be accomplished.  “No,” he said, “I don’t like to be encumbered by what is possible.” 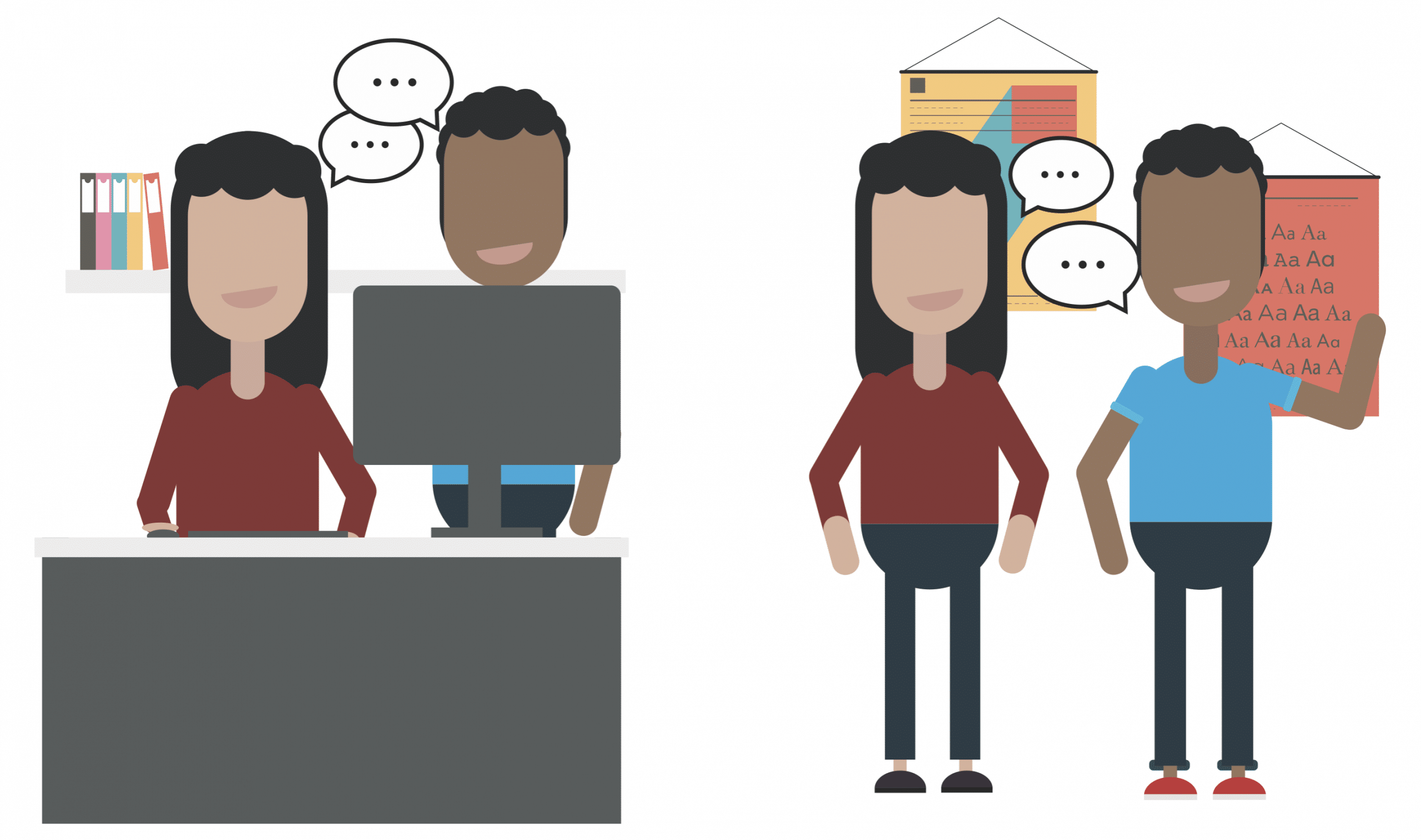 These types of walls cannot happen in a design-thinking project. Instead, because we are developing and prototyping as we are designing, everyone works together from the beginning.  We’re ideating and testing, there is an energy about the process, and  we tend to hear “can we do this” and “wouldn’t it be cool if…” Nobody has the option to hide behind their title or a wall. And you can see the results in the work.

When folks start working together, one truth becomes clear quickly. And that is that we all design. Steve jobs famously said:

And, if how it works is part of design on a website, then naturally there are a lot of people who are influencing and crafting this design. Jared Spool has said that:

Anyone who influences what the design becomes is the designer. 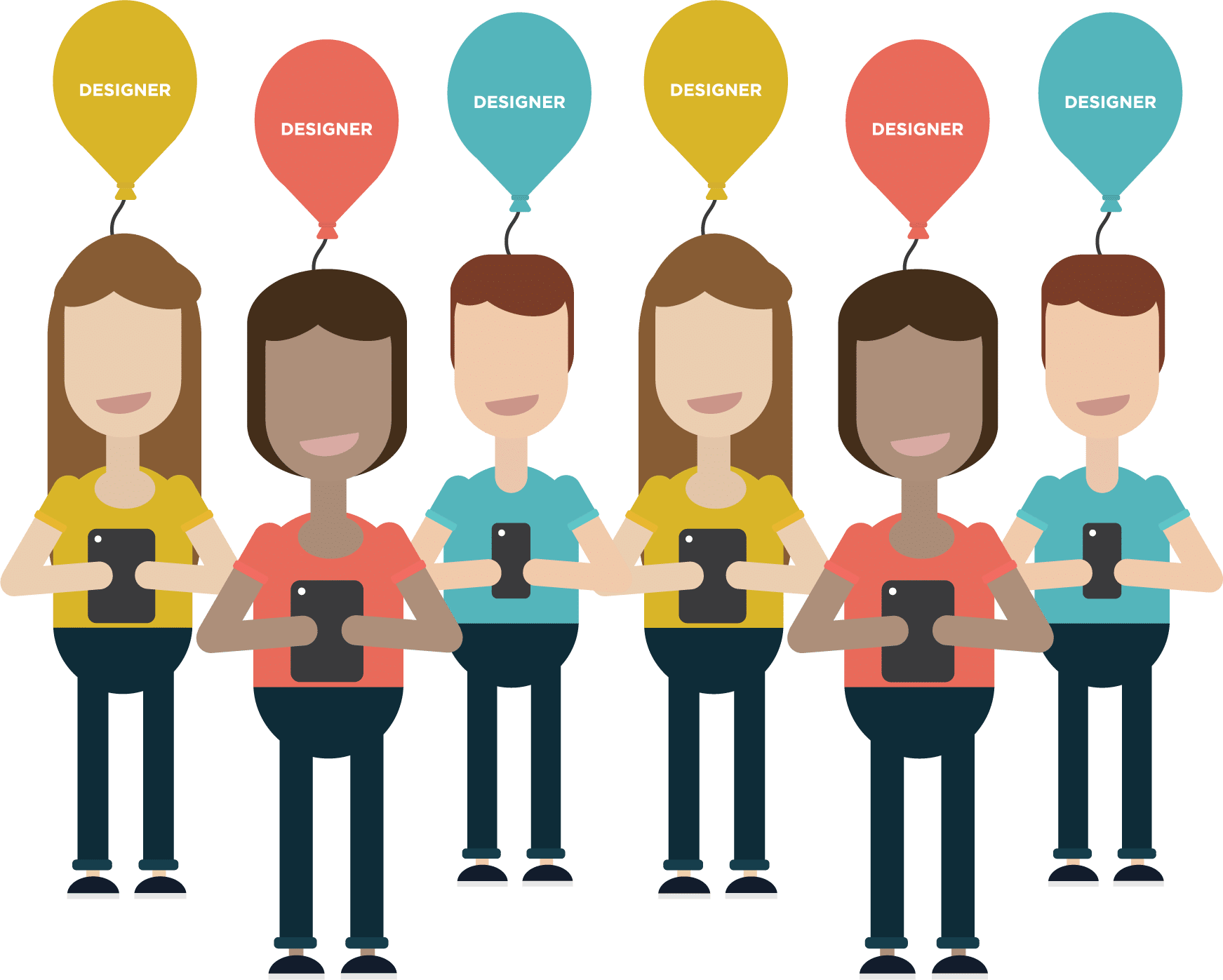 How many times do you see something wrong on a project but decide not to mention if because you aren’t the designer, you aren’t in charge of that task? Design Thinking puts us all in the design seat, which means we’re all expected to be a part of the whole process.

Inherent in the team B approach is that all voices are heard at all phases, rather than parsing out expert voices.  This isn’t just a hippie fantasy. We need different ideas. A story!

Some years ago, a truck driver tried to pass under a low bridge. He didn’t make it through. the truck was stuck under the bridge. The driver couldn’t go forward, couldn’t go back. It caused massive traffic problems.

Lots of people came out to help: engineers, firefighters, truck driver. Each came up with a solution that fitted within their worldview, their expertise. But none of them worked, not of them were feasible. Not chipping away at the bridge or cutting the top off the truck.

A kid walked by, looked at the truck, at the bridge, then looked at the road and said: “Why not just let the air out of the tires?” This simple solution worked to the amazement of all the experts trying to unlock the problem. There is a saying: 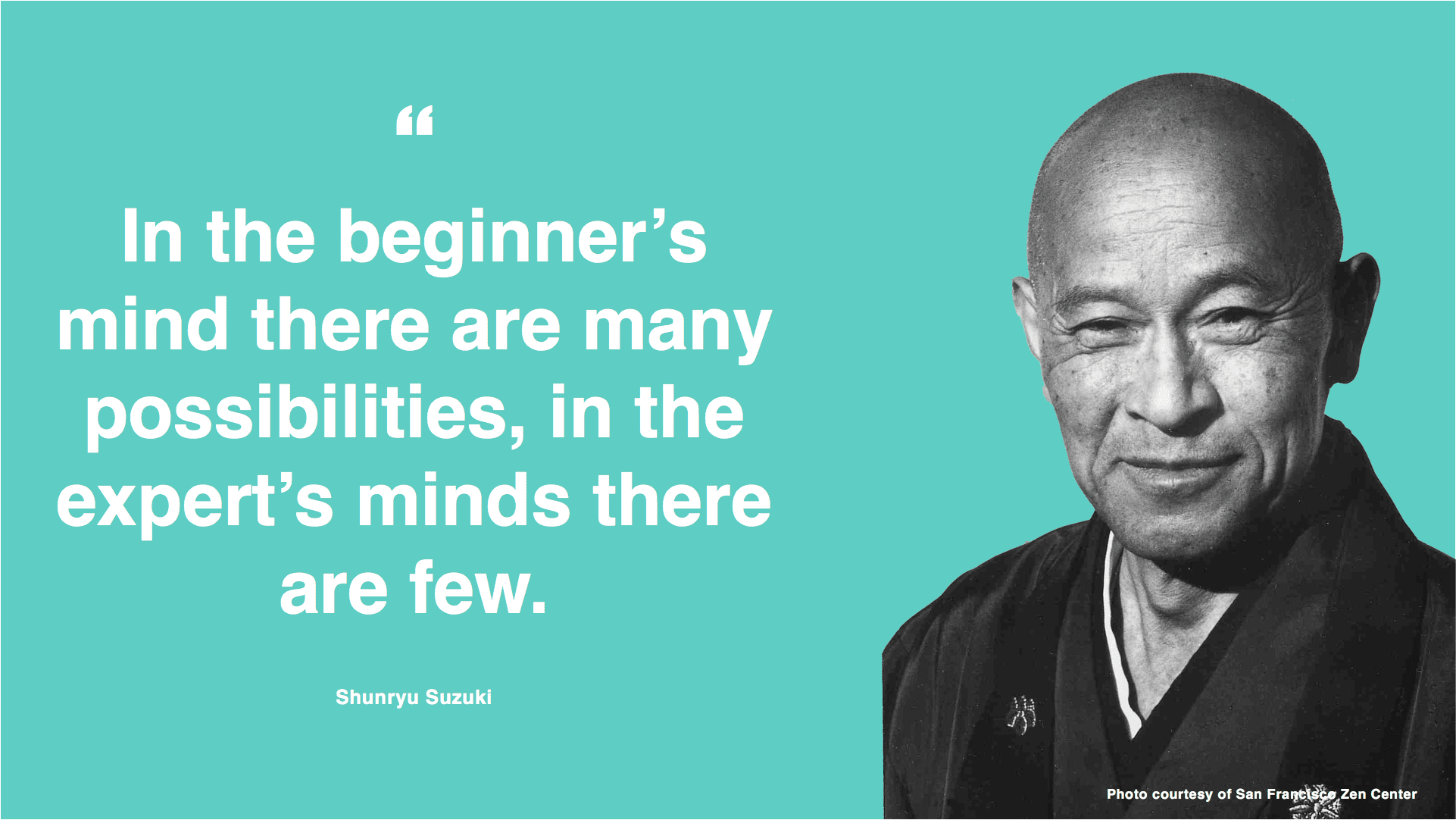 In our team makeup, we leave room for both to bounce off of each other. There is always someone on the project that says “I don’t know much about websites but I have this idea…” You want to hear that idea.  We want to hear all the ideas. We see the benefits of ideating as a team again and again in our own studio. And, in the end, it really doesn’t matter whose ideas end up going forward.

I’d like to tell you about our latest website launch for SakéOne. Our team ran very much like the Team B. It was comprised equally of members of our team and theirs, some of us with years of experience, some on their first web design.  Our meetings were fun, full of chats and snacks, and highly productive.

At one point, we needed a simple way for them to tell the story of their individual saké partners as well as their own brews without creating an entirely new website for each.

After a few design iterations of the individual saké brewer landing pages, we started making lists of how to subtly distinguish Portland and Japanese brewers.  We realized that Portland area has Mt. Hood much like Japan has the iconic Mt. Fuji. We began working with this imagery, along with the graphics on individual bottles. 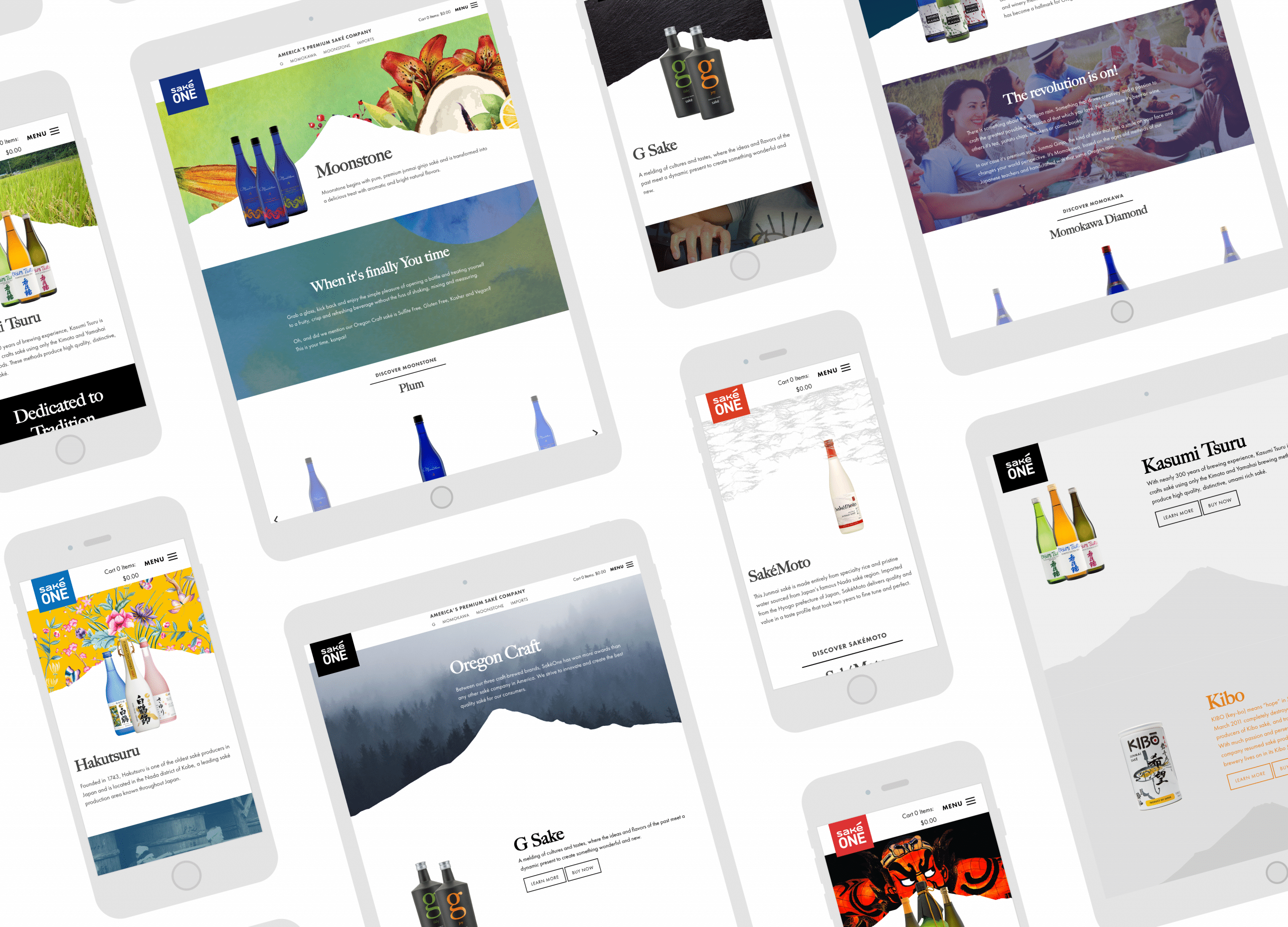 What we came up with was headers that layered the brand graphics with a regional overlay and then the bottles. This also referenced the tie to the land and region. Turns out this was just the infusion the brand needed to tell their story and they are running with it. They are using this new design system to delve deeply into stories that matter to them, to their customers, to the farmers. 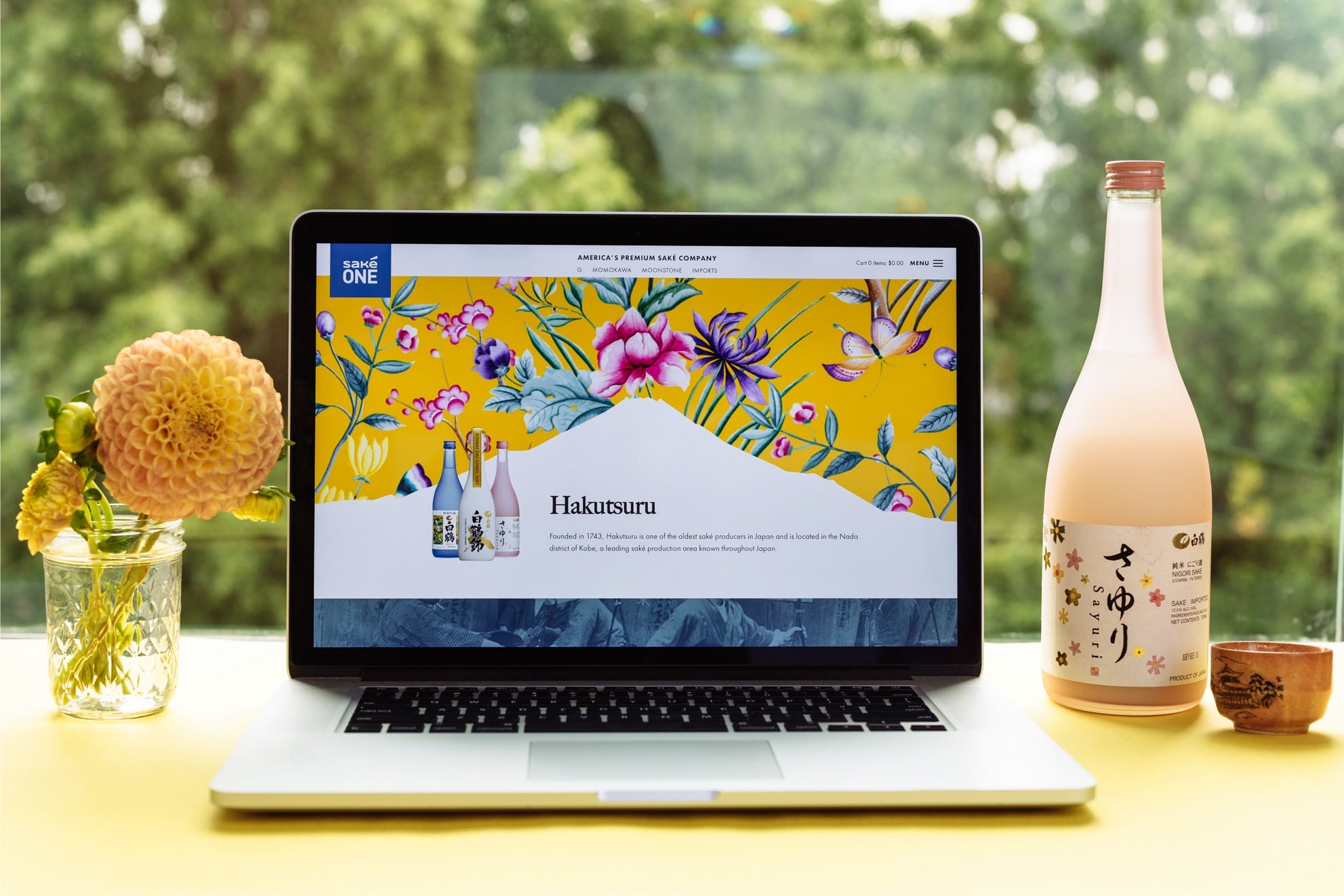 Who’s idea was it? Can’t remember. Who cares. The ultimate success of our project is whether the website is a success for the person it is being built for. We’ll ultimately be judged on how successful a project was, not whether were the ones with the good ideas.

What I do remember was the absolute excitement in the room when we launched the site and that their team joined us for a launch celebration at a local tavern. They’re proud of the site and feel genuine ownership and pride in it.

There is something pretty miraculous about working together as a team and really listening. I think back to a client of ours who had launched a beautiful new espresso machine that wasn’t gaining the traction they wanted in the market (which was a shame because this machine is to espresso machines what Lamborghini is to cars).

La Marzocco had been talking to customers and realized that what folks wanted was the ability to customize their own machine, much like we do when we shop for cars. This wasn’t a formal study, he was just actively listening. He had come to the project with a strong empathetic understanding of customers and we, in turn, listened to his viewpoint. 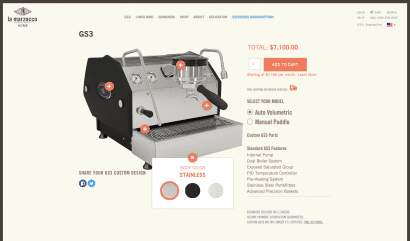 Their customers wanted to tinker and build and dream about owning the machine. So, we built a configurator and the ability to share your custom design via social media as a way of beginning to feel ownership of the machine. 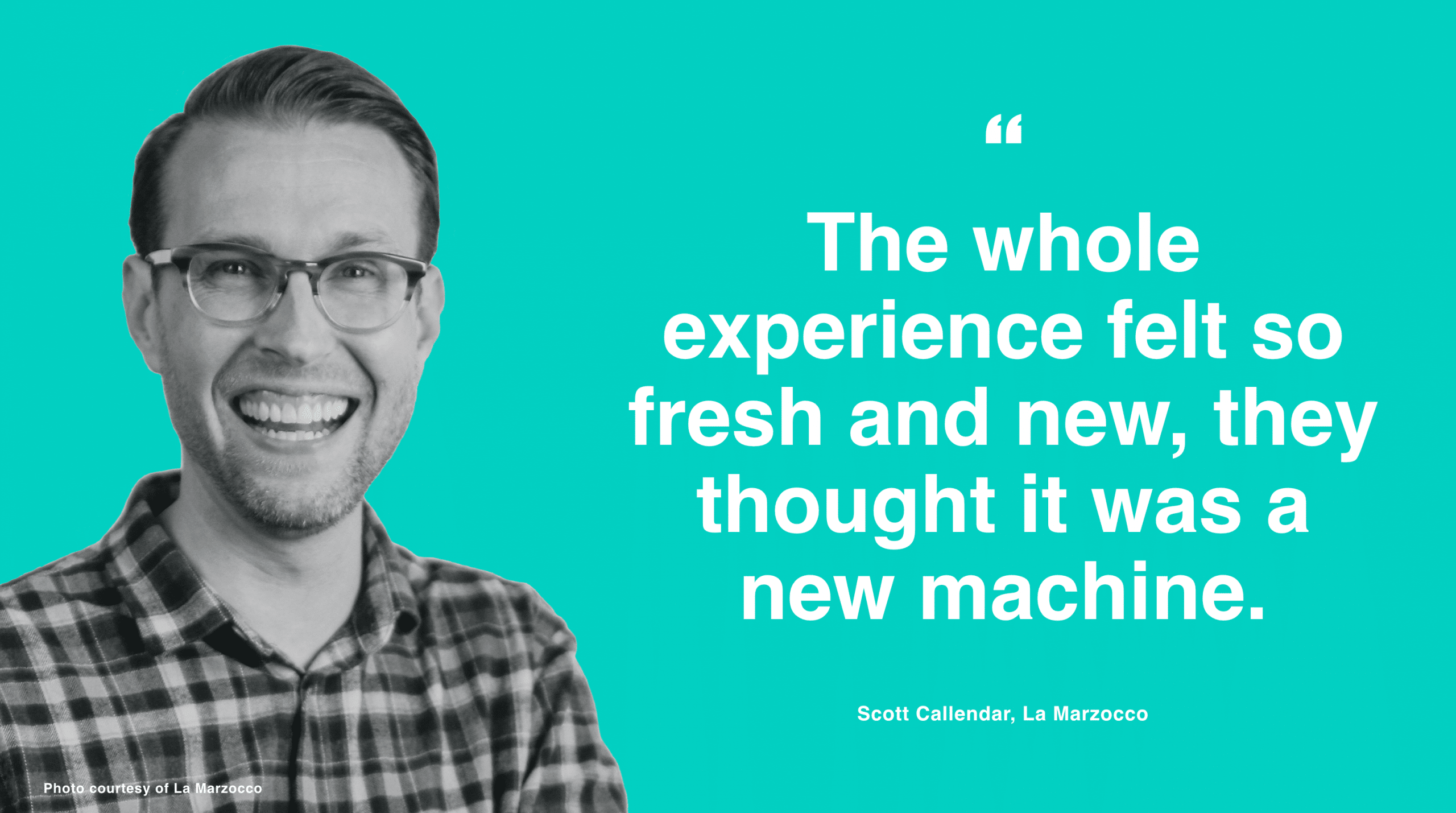 At this point, 90% of the machines sold online are through this GS3 customization page. This is why we are here, this is why we do what we do.

Custom web design is a process of understanding needs and using our creative minds to solve problems, to articulate particular brand stories. The stakes are high for our clients who are relying on us to get it right. And we owe it to them to give our all when working on their website.

When we design a website, we are dreaming about the future, a future where our clients are successful and we’ve put something out there we can be truly proud of.  And the tools we’ve talked about today can be taken piecemeal or altogether to improve the process of customization and make these projects truly remarkable.