In the bigger scheme of things, Needmore is a relatively small studio. As such, the founders tend to wear many hats. One of our more critical tasks is evaluating and sending proposals for new projects. Kandace, our Studio Director and my co-founder, tackles more of this than I do. However, I’ve been dipping my toes in more and more.

One point has become clear straight away: the more team members working together to get the word out and find fitting projects, the more important a solid CRM becomes. We’ve been looking for a good fit for us and, in the process, sampled and tested a good number of CRM solutions. Since I’ve wasted so much damn time doing this, I figured I would share what we’ve learned. Perhaps it might benefit other studios like ours.

What is a CRM? Glad you asked.

Basically, we need a way to share leads, keep ad-hoc discussions and deals in one place, and forecast our sales a bit. Some systems are better than others for this.

There are a ton of enterprise solutions we didn’t evaluate.  First, the elephant in the room. We did not even consider Salesforce. I have evaluated in the past and it seems kludgy, has too many features, and is the design equivalent of Microsoft Word. (Worse, every time I’ve had a conversation with someone there, I’ve walked away feeling like that was a company I would never give my money to.) Instead, we began testing and evaluating a handful of the best CRM solutions out there for small team such as ours.

37signals were the first to convince us that a CRM could be useful. Highrise accomplished this with a casual, simple, and friendly interface. Years ago, we gave it a go. Suddenly, Kandace and I could both see our deals, contacts, and even some emails that were forwarded into the system. But, that’s about all we could do. (For example, there is no way to move projects through a linear pipeline.)

The service hasn’t changed much in the interim. 37signals changed their name to Basecamp and effectively discontinued Highrise, which was recently resurrected by another company. Improvements, however, will take time and it’s not completely clear what direction Highrise is headed in.

It’s great that Highrise retains the simplicity of the original product, but it feels five years old. For example, the graphics are not retina and the font is still Lucida Grande, which feels weird now that even Yosemite has moved on. There’s a reason the Highrise website doesn’t have screen shots.

Furthermore, the mobile experience is absolutely terrible, which was the nail in the coffin for us on this product. An app has been mentioned as  forthcoming, but these things take time. Until then, Highrise is useless on mobile, where we spend a majority of time. Ultimately, the lack of features and unsure footing has kept us away and we’ve moved on to more promising alternatives. 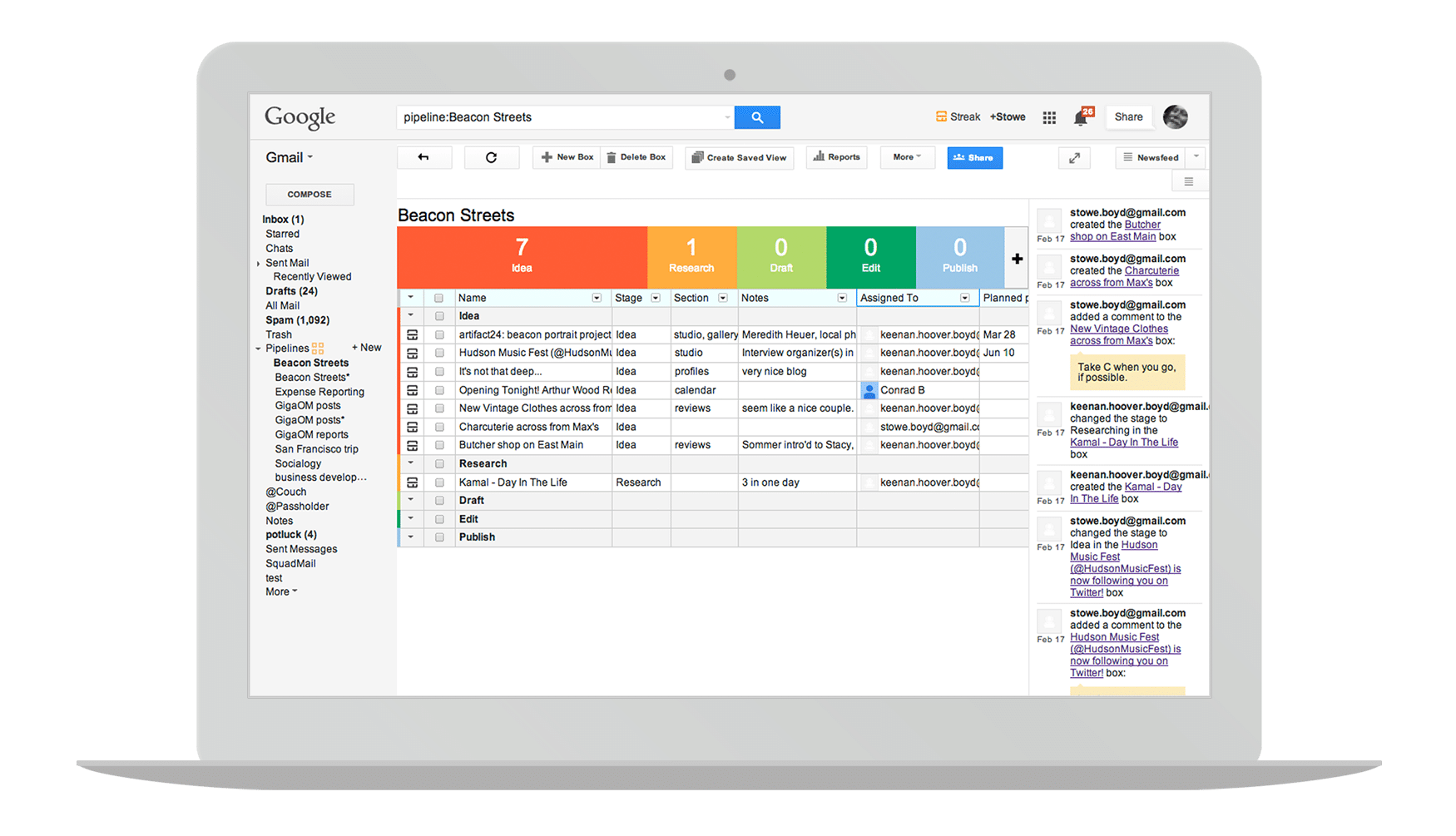 Streak is a fascinating service. It’s one of many apps that exists more or less inside your Gmail interface. Since our team uses Google Apps anyway, this seemed quite promising.

The key feature is that you see your pipelines across the top of your email. This means you can have a pipeline for sales, one for recruiting, and so on. Switch between them at will. This is clever because all correspondence from someone simply shows up in that pipeline automatically.

The key drawback is, of course, that it’s in Gmail. There’s no simple way to include calls or other arbitrary notes. I also sense that it’s extremely hard to add new features since the product hasn’t evolved much since it launched. Further, the mobile app for iOS hasn’t been updated in a while (also a bad sign).

Streak was interesting to play with, but isn’t a good fit for our team. It has some nice extras for email, such as view tracking, send later, and shippers… but for us, the limitations are too great and I’m not confident about its future.

Our cost: $19 to $39 per user per month
Pros: multiple pipelines, right in Gmail
Cons: cannot log activity that occurs outside of email, not being updated often

When the discontinuation of Highrise was announced, we settled on Base, a service that is designed to automate more of the work for you.

Base emphasizes a mobile first approach, which is actually a much better fit for us these days given how much time we spend on mobile devices. Base also explicitly exposes a customizable pipeline, something that Highrise didn’t have for us. This was a welcome change.

Base seems to also have gotten a bit stuck, however. For one, it is over complicated and all of the apps have some idiosyncrasies that drove me crazy. The integrations never quite worked the way we wanted and you didn’t get a very good visualization of the pipeline. The web app was clearly just a themed version of something written in the Bootstrap CSS framework and looked like it was never going to be “finished.”

At the end of the day, Base drove me crazy. I kept having support issues. Plus, its attempt to manage my email was hopelessly underpowered. It was expensive… with reporting, it cost us $75 per person.

Once again, we began looking for alternatives.

Our cost: $75 per user per month for a plan with basic reporting
Pros: customizable deal pipeline, mobile friendly
Cons: over complicated, buggy, drove me mad, expensive

RelateIQ promises automation. They use big Data to pull in information about your contacts with implication that it saves you a ton of time. In practice, this was rarely the case for us. They were constantly telling us to reply to emails that had already been replied to or importing data into contacts that was absurdly incorrect.

Their goal seemed to be a rethinking of the CRM space and so they threw out all assumptions like the “pipeline.” I think this was a poor choice, but we gave it a shot anyway. Like Base, they had a decent mobile app and seemed to be actively developing it. The service is not cheap, but is about equivalent to Base. We figured if it did save us all that much time, why not give it a shot.

Once again, it didn’t take long for RelateIQ to drive us crazy.

The interface got confusing fast. I could never make out what was shared with Kandace, what was in a pipeline, or even how to do a simple export of my data. RelateIQ has the feeling of being designed by someone whose first love was spreadsheets, not great user interface. It feels akin to using Excel.

Worse, their support was not just bad, but bordering on Comcast-esque pushyness. They were more focused on selling their own service than hearing our feedback or concerns. Furthermore, they were just bought by SalesForce.

We only briefly tried Sellf. It is still quite new and has promise. The big win is the design. Far and away, this app has the most striking and contemporary design. It’s lovely and, considering that we obsess about design day in and day out, this is important to us.

If Sellf had a pipeline view, we might have been sold. As it is now, it’s too simple for us. If several of our team are going to use it, it needs to be a little more flexible and robust. For example, I like the idea of having a pipeline for more than one thing, but this is aimed solely at sales.

It is very affordable. If you’re just getting started, it’s free. The basic plans are about the cheapest around. I would plan on checking back in a year or so, because it will probably have improved significantly.

Our cost: $3.99 per month
Pros: design
Cons: no deal pipeline view, too simple

Presently, we’re settling into Pipedrive. Pipedrive lets you view your pipelines in columns, dragging people between the columns. We use Trello a ton and this feels a lot like that.

Getting your head around Pipedrive is easy, mostly because it is so visual. You can also switch to a “timeline” view that shows your forecasted sales by month, in columns, or using the likelihood of each deal closing. This quickly helps you see at a glance how well you’ll be doing in the coming months.

Adding new leads is fast. You can enter a person and company name and add the rest later if you’d rather. I love this! Many of the other solutions overburden you with questions that made me reluctant to dump my info in there.

The biggest shortcoming is the iPad app, which only lets you see one column at a time. At least there is an iPad app, something which many of the other services cannot even claim.

Finally, it’s $12 per user per month. No pricing tiers, no extra paid features… This is refreshing and makes it among the more affordable options we’ve explored.

For us it really came down to a choice between Sellf and Pipedrive. If your needs are modest, I would definitely recommend Sellf. It is by far the most attractive and modern of the services. Both the iPhone and the web app are terrific. I expect it to go places.

However, if your needs are little more substantial, we would recommend Pipedrive (despite its horrible name). It lets you manage your pipeline in a visual way that no other CRM does, and is a good fit if you, like us, enjoy using Trello.