There is something unbelievably charming and nostalgic about The Woodsman Tavern on a wind-swept Portland evening. On my most recent visit, I was transported to another time and place. Perhaps it was Neil Young crooning or the flowing whiskey. Maybe it was the juxtaposition of lovers seated at high tables whilst families nestled into sturdy wood benches. It is difficult to put your finger on just what is so darned right about the place. And then, it dawns—you can feel the love that has been poured into every meticulous detail, from the oil paintings and incandescent lights, to the Oregon coast oysters and Tennessee ham; you intuitively know that someone has spent sleepless nights dreaming and tinkering, thinking and obsessing until the place was just right. That someone is Duane Sorenson.

On a recent chilly Portland afternoon, Duane met us down at the Horse Brass and, over a beer (or two), talked design with us. Below is the first of a two-part interview, focused on design, that kicks off a new feature here on Needmore Notes called Taste. (You can also jump to the second part of the interview to hear about the menu.) 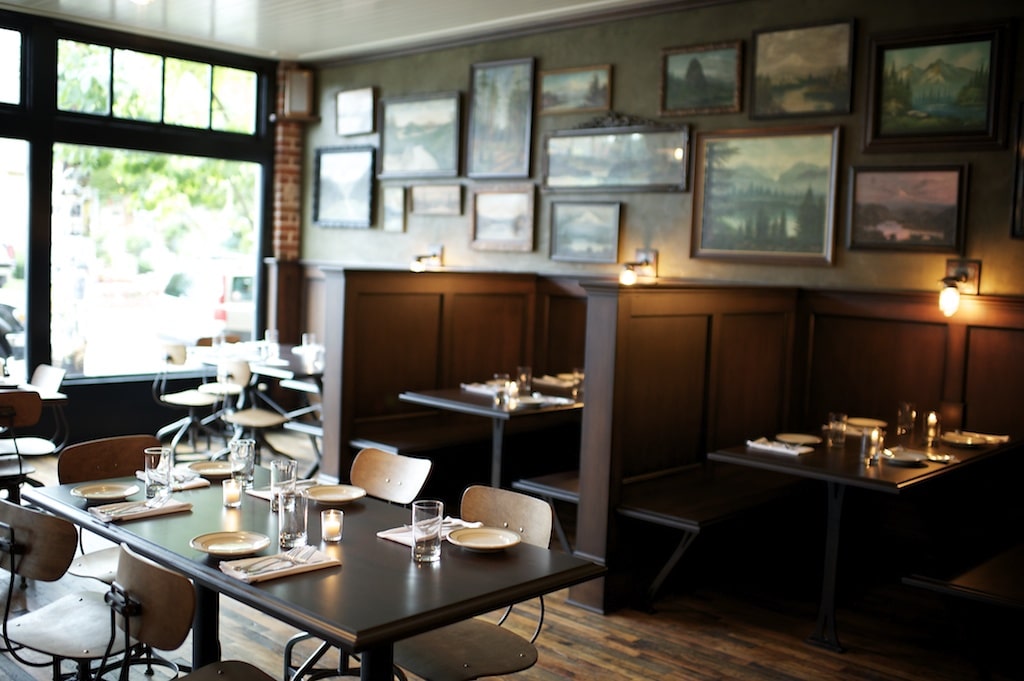 Needmore: What was your inspiration for The Woodsman? Where did you source the materials?

Duane: The inspiration has definitely been from years of dining out and years of eating at restaurants. As far as the design goes: old Portland, old Northwest, Pacific Northwest, 30s, and 40s have been an inspiration. Also, Brooklyn – old Brooklyn – the 30s and the 40s. 20s Brooklyn and New York City combined with the Northwest woodsy: pickup trucks, suspender, Pendleton, Filson… 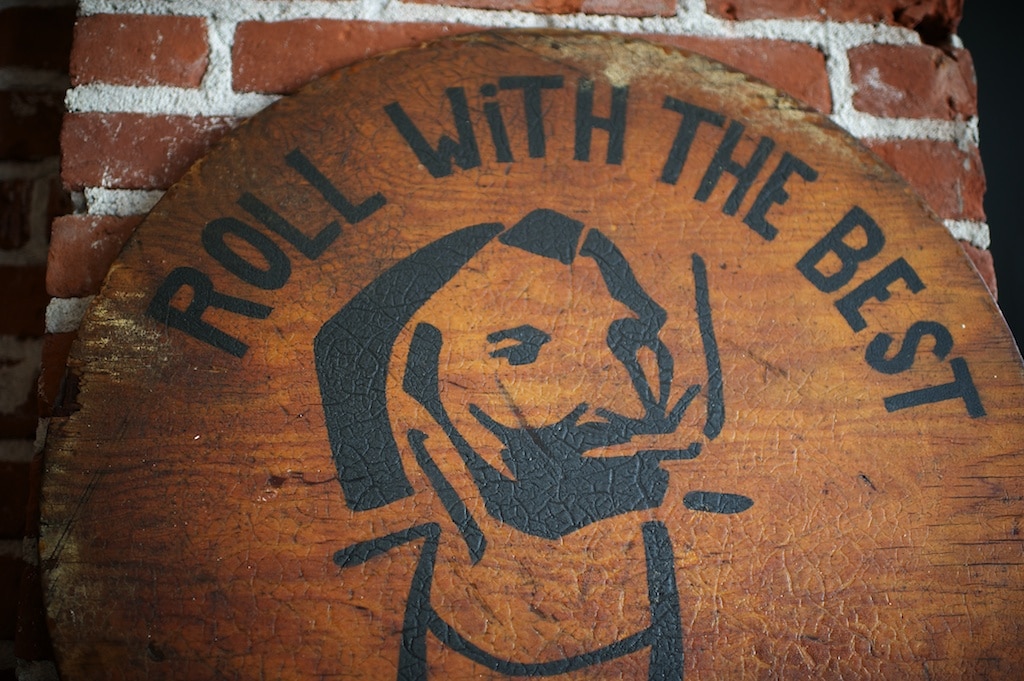 Why is it you have this Zig–Zag guy in there, too? Where did that come from?

Zig–Zag, to me, is one of the most inspirational, cool, admired marketing I’ve ever seen. I got the Zig–Zag man. I use Zig–Zag rolling papers every single day probably. That, probably, was the start of my interest in the Zig–Zag — supporting Zig–Zag daily and being part of my day, jumping into or seeing the image and admiring the image, the Zig–Zag man. I’m not sure if you know this, but the Zig–Zag man has changed and been tweaked throughout the years. More recently, you have the more kind of 60s, 70s guy that wasn’t as detailed. It kind of was… just a cool image, you know? I’ve wanted, for some time, wanted the tavern to offer Zig–Zag rolling papers, the originals, to our customers there. Again, I love the tins that they’re in. The marketing that they’ve done, their imagery, their icon or their guys. I’ve always admired it.

Wow, so you’ve been thinking about it for five years?

Are you finding those in the States or shipping them back?

United States of America, mostly East Coast. Most of the industrial furniture that’s in there has come from the East Coast. There’s a lot more industrial manufacturing type stuff out there, so cast iron was definitely more common out there. I still today look for the old fucking shop lamp that has a patina on it, or the old clock that’s in the bar area. It’s an old industrial clock.

Yeah, for some reason.

I’ll take a look at it this afternoon. 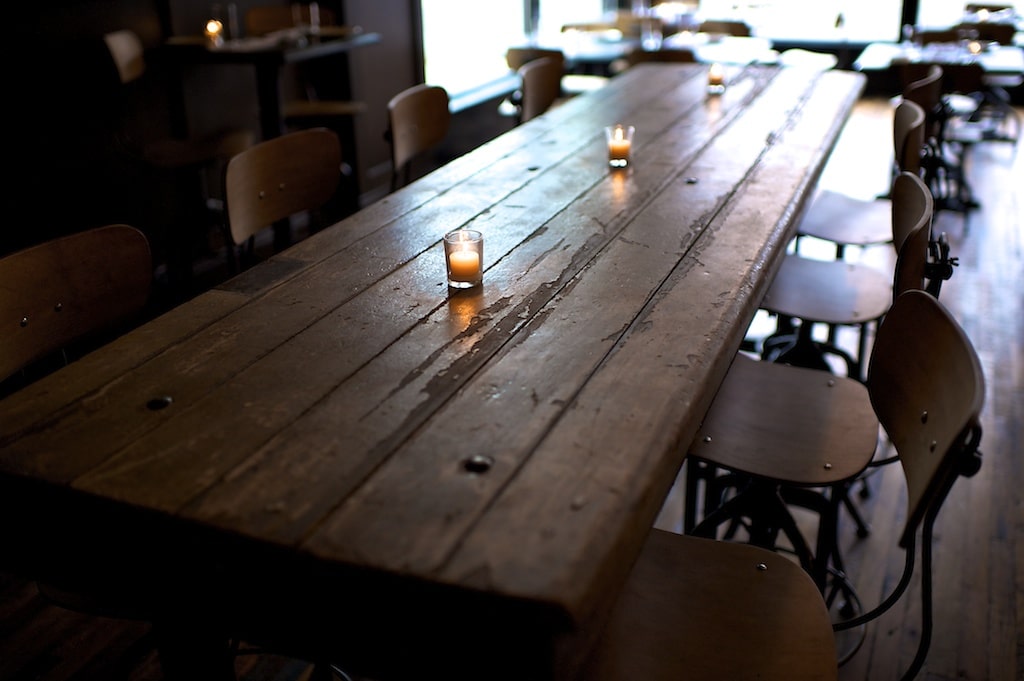 So, you know, one of the challenges I had as far as design goes is having all this old shit and having it match and be a good marriage with new shit. Because we have to do pretty much 50/50, there were a lot of anxious, sleepless nights making sure we were going to nail it, making sure the floors match the brand new booths that we were going to stain to make them look old. Finding the right person to do that without making it look faux or an Oprah magazine, Martha Stewart, do it yourself out in your fucking garage thing.

I’m really happy the way everything turned out, from the bathrooms that feel like they’ve been there for over a hundred years to the way the floors match, the booths match, the plastered walls and the color of the plastered walls and how all the oil paintings that I’ve been collecting for about two years fit on that wall. I’m surprised things are going together. And you know, the Zig–Zag, how that all has fit in.

How much of that have you… did you picture before you started, and how much was after the fact?

It was an idea, and I had enough thought put into it that I had confidence with putting the things together. Although, being anxious like fuck, we’re going to paint the fucker tomorrow. Yeah, there was a lot of thought time and energy put into. But at the same time, a lot of winging it, fingers crossed. 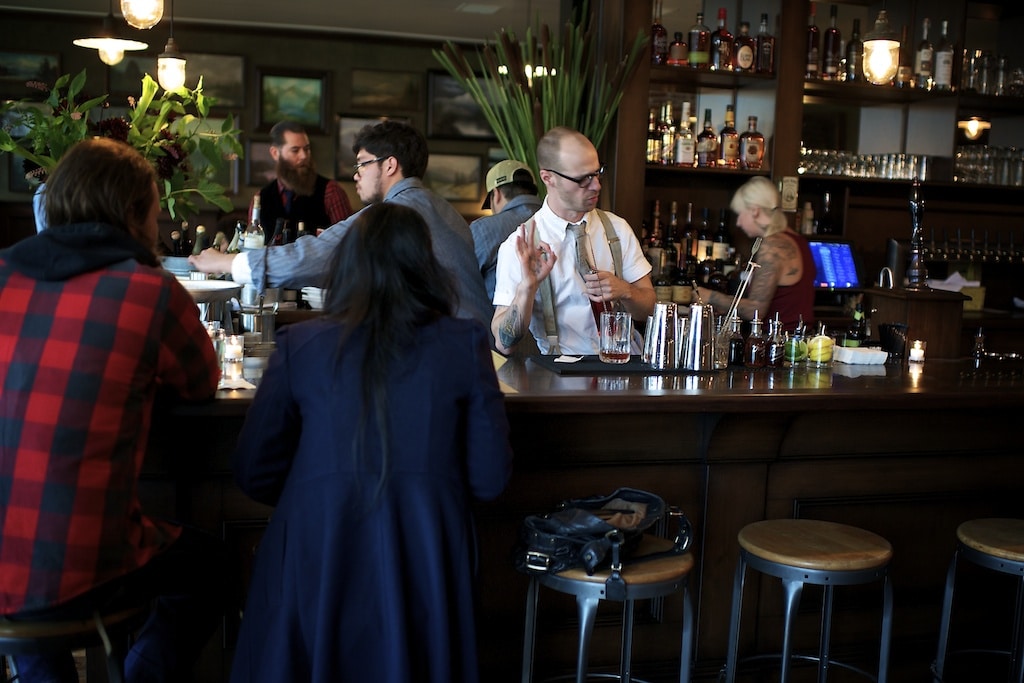 Do you have a dress code for your bartenders?

It’s not a dress code, but there’s been talk of… and there’s been ideas, dress and fashion ideas, brought to their attention that we would like to have our floor and our bartenders to support.

I told all of them to, and this isn’t a plug for Mac, I go on iTunes and rent a series or a season of either that HBO series Boardwalk, and/or rent or watch an episode of the HBO series Deadwood, and for them to choose a character and dress that way from the waist up. Maybe incorporate… maybe pay some attention to the footwear, but I don’t care if they wear jeans or whatever. Pick a character on Boardwalk or Deadwood, and throw some of that into your work wear.

I had them all check out, or dig up images for the Ralph Lauren line, RRL. It’s a Ralph Lauren line of clothing that focuses on cowboys, prohibition, early motorcycle and, like, shop wear. So, obviously, they have different seasons and sometimes, in the summer, they go a little too sailory, beachy for me. I’m not that guy. But, usually in the winter and the fall, they nail the suspenders and the flannel shirts and the vests and the Americana, scarf around the neck or their tweed-heavy wool slacks with suspenders, that kind of stuff. It’s a designer or certain brand clothing that I inspire people to research or look up images.

Read on in Part 2 of the interview: All about the food, man.
Photography courtesy David L. Reamer


Update: Check out our 2015 redesign of the Woodsman Tavern website