After a long day of web design, I’ve found that my drink of choice for relaxing is a Rye and Ginger. Before I go into specifics about how I like them, however, let me provide a bit of history.

If you could ask the guys under the fedoras in all those old black-and-white pictures of New York what they’ll have, odds are very high they’d tell you rye. Straight rye whiskey was the whiskey of working America. If you built skyscrapers or puddled steel, walked a beat or booked bets (we’re not gonna be the ones to tell you that’s not work), you drank rye. Sharp, musky, slightly oily, rye has got to be one of the manliest items humankind has ever created (although plenty of dolls liked it too). Back before Prohibition, though, no self-respecting saloon habitué would dream of poisoning it with ginger ale. (Brandy, sure; whiskey, no.) Unless he was a man of fancy habits, he’d take his rye straight, or at worst with a splash of soda. [Esquire] 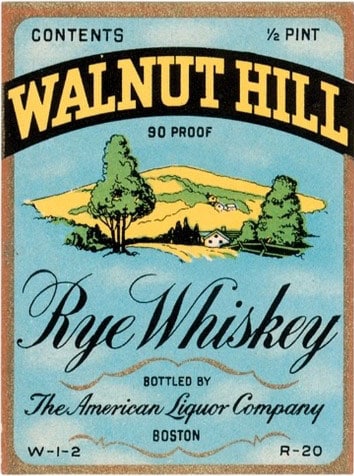 You can still tell if a bar in urban America primarily serves working-class customers by the bartender’s reaction when you order a rye and ginger. If they start making the drink without batting an eye, you’re home. Take up a bar stool, and toast your peers, many of whom will be drinking mass-produced beer. Tell them they can do better than that swill. This is the rye cocktail for the average American, the hard working backbone of our nation. [Rye Whiskey is for Patriots]

Personally, my quest for a delicious Rye and Ginger has been a mixed bag. I have been taste-testing ginger soft drinks for a month or two, and I’ve definitely got some preferences. I also tend to have some whiskey on hand, so I randomly tried a mixture at some point. It just seemed like the two would go well together.

As it happened, the whiskey I had was Bulleit Rye, and it was good.

I immediately started to wonder why I hadn’t heard of this drink before. Had I just invented this combination? Or was there a history behind this. Indeed, I wasn’t all that sure what was different about rye whiskey, as opposed to bourbon.

In the United States, “rye whiskey” is, by law, made from a mash of at least 51 percent rye. (The other ingredients of the mash are usually corn and malted barley.) It is distilled to no more than 160 (U.S.) proof (80% abv), and aged in charred, new oak barrels. The whiskey must be put into such barrels at not more than 125 (U.S.) proof (62.5% abv). […] Rye whiskey was the prevalent whiskey of the northeastern states, especially Pennsylvania and Maryland, but largely disappeared after Prohibition. […] Rye is currently undergoing a small but growing revival in the United States. [Wikipedia]

I have observed other brands starting to make rye, such as Bulleit which I mentioned above. The article goes on to say:

Rye is known for imparting what many call a spicy or fruity flavor to the whiskey. Due to its distinctive flavor, American rye whiskey is sometimes referred to as America’s equivalent of an Islay whisky. Bourbon, distilled from at least 51% corn, is noticeably sweeter, and tends to be fuller bodied than rye. As bourbon gained popularity beyond the southern United States, bartenders increasingly substituted it for rye in cocktails like Whiskey Sours, Manhattans, and Old Fashioneds, which were initially made only with rye. All other things being equal, the character of the cocktail will be drier with rye.

That explains it. I like my bourbon just fine, but it can be a bit thick and sweet to my taste. That’s not the case with rye, which tastes much more subdued and dry. A cheap generic ginger ale on tap, mixed with mediocre bourbon, and topped off with a pile of smaller, rapid-melting ice cubes is… terrible. It’s the opposite of a good drink. So is it possible to make the perfect ginger ale drink?

The Needmore Rye and Ginger

This is best served in a tall glass, and let it sit for half a minute before drinking, just so the outside of the glass starts to perspire. It really helps if it’s a warm day, although any time of year will do.

I like mixing this with Fentimans because it’s very dry to begin with. Fermented ginger root extracts make up more of the product than the sweeteners, so it stays dry and doesn’t overwhelm. And the 9.3 oz. bottle is perfect for making two of these drinks. If you can’t find Fentimans, try Ginger People, which is also exquisitely bitter and dry.

My choice of rye is somewhat restricted because there are few available at any given liquor store. I’ve tried this with Bulleit, but I feel this brand just edges it out. Depending on the bar you go to, however, you might find a much better selection. The Country Cat, here in Portland, carries a half-dozen ryes, which is surprising and delightful.

If you’ve got a good rye whiskey recipe, I’d love to hear from you.