Well Rails Day 2006 has come and gone, and we’re really proud to have the fruits of our unusual labor available to you at cuppin.com. Please visit, have a look around, even perhaps create yourself an account. We’d love to hear what you think.

The experience was quite thrilling for me. It’s not usual to have such a sense of community surrounding an event that pretty much takes place all over the world. 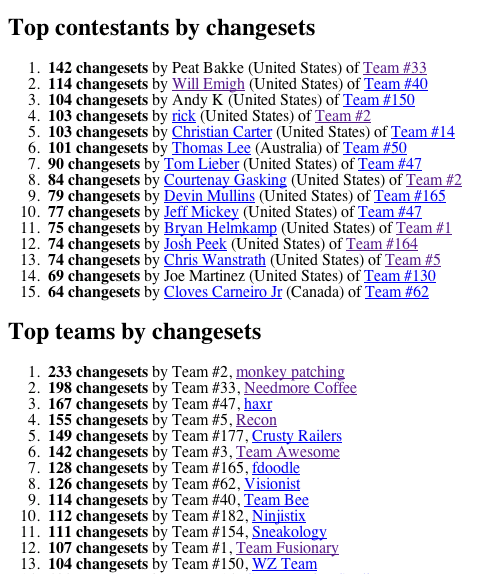 But we really got into the spirit of the thing, and Peat in fact was working so furiously that he ended up the highest ranked committer in the event, and our team (Peat and I, aka Team Needmore Coffee) ranked second! I definitely wouldn’t have even considered such a thing if not for Peat, with whom both Kandace and I always have such a good time collaborating with.

Finally, I have to say that this was a great way to get excited about the Rails Conference coming up in Chicago next week. We’re very excited to meet all these other great talents, and learn all about Rails!

(For those curious, to “commit” something simply means that you’re basically “saving your changes” to the Rails Day server. The rules for the event said that you had to commit at least ten times, just to kind of prove that you were working the whole time. But it’s not a bad idea to commit as often as you can, because that helps you keep in sync with your teammate(s). It also kind of proves that you were awake the whole time!)