About six months ago, we decided that our systems weren’t really working. Keeping track of odd tasks and potential clients is quite an important part of our business. We were using Highrise for managing prospects and sharing tasks, but it was expensive for the two of us, and it wasn’t flexible enough.

So we decided to switch. After looking around, we decided to give Daylite a try. It’s a Mac-only app which has a rather nice client for the iPhone and iPad. It sounded all wine and roses, so what the heck.

As of today, we’ve dropped it. Unfortunately, this was a rather expensive mistake. So that others in our situation might not make this mistake, let me explain our thinking.

I can break it down to three main problem areas for us.

The software is confusing, and performs poorly

Perhaps the biggest problem with Daylite is that it feels like you’re using a database application. Most applications are, to varying degrees, just front-ends for databases, but it’s very damning when I feel like I’m using one. You don’t get into the flow. You can’t just type in a list of tasks, as fast as you can think of them. Each one is a process.

I would often spend several minutes just trying to do some task that I think should be possible, only to give up in frustration. For example, you can spend extra for a license to integrate the app with your email. And it stores two basic types of contacts – people and companies. Yet you can only create people from your emails, not companies. This was not at all obvious, and still doesn’t really make sense to me. Worse, you can’t change one to the other. So half of the use cases of email integration are broken. 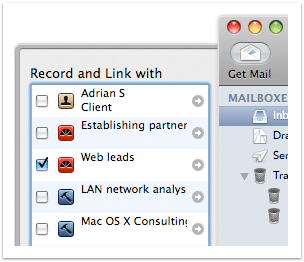 Even simply using the app for basic task management was fruitless. The task interface is incredibly confusing, and it would probably be easier to use a spreadsheet. You get way too many different lists, and the app is not at all optimized for that – or any other – task, it would seem. You create tasks, but they then seem to disappear. When an alert eventually pops up, dismissing it is confusing, and I had more than once alerts continue to appear for completed tasks. There was no apparent means to stop this madness.

The software is very expensive

Way too expensive for our needs. You have to pay $220 or so for a license for the app and its pseudo-functional Apple-email-only integration. Then, they want another $99 per year for each iPhone license. This set us back about $640 for two users. Holy cow.

You can argue about whether or not this provides value, and I’m sure it would if the app ended up being useful to us, but we ended up poor and unhappy.

And don’t forget, you need a server if you have more than one user. So that’s going to cost you, too. This is a whole area we don’t want to get involved with – we love “cloud computing!” If I never have to manage another server it will be too soon.

Every time I contacted this company, I ended up getting an email from India in the middle of the night. I don’t have a problem with outsourcing in and of itself. The problem is that the responses were never helpful. They were confusing, obviously copied-and-pasted, and never solved my issues. Most often, the person would ask me for a ton of diagnostic information, even though I was reporting what was apparently a common error. Other times, they would cut and paste instructions on how to complete a task I was not attempting.

Several issues never did get resolved. For example, if you close your laptop and go home, then open it and try to use Daylite from there… forget it. The app usually crashed, and then if you opened it, it claimed you were out of licenses. The fix involved painstakingly logging into the computer acting as a server, restarting the app, then restarting Daylite on all the laptops. I can’t begin to guess how much time we wasted going through this dance.

I actually got much better support from them via Twitter, but you can’t ask very complicated questions on Twitter. Sooner or later, you’re told to submit a ticket on the website.

Therefore we are going with Flow. It’s a simple online task management app that works the way we think. It’s instant. You can discuss any task. You can easily rope in folks who don’t have accounts. It’s reliable and fast. I’ve already seen that their support is good. They maintain and improve it. And it’s made by Metalab, and we’re big fans of their work.

It’s not perfect. They don’t have an iPad app yet, and the website is basically useless on my iPad. The iPhone has a couple of bugs, but they’re not show-stoppers. And while you can use it as a desktop app inside of Fluid, a true app would be nice, though I don’t expect one.

All in all, though we’ve only been using it a week, we’re in love. I feel that I can say we use and recommend Flow.